July and August were HOT, HOT, HOT! For me, it felt like we were teetering on the edge of habitability. After a bit of a cool down in late August, we were hit with a heat dome in late August/early September, making the temps climb up over 100 to 105 degrees where they will remain for another 4 days. We also experienced monsoons with flash floods - about 5 of them, the last one being a monster that turned parts of Main Street into a river, and deposited debris everywhere while reclaiming real estate all along Mill Creek. Everything looks different and it is an awesome thing to witness the changes. I am looking forward to watching the natural evolution in places that are untouched by human hands. But in the meantime, we have had our work cut out for us trying to keep trails passable as repairs go on all across the region.

Nevertheless, we tried to live life around the edges - early morning and late evening - so we could continue our FreeCycle pickups, do trail work and maintenance, and fit in a few other things as well. One such other thing was meeting up with the good folks at Replenysh at the CRC (Community Recycle Center) on July 15. They are working on creating a circular economy by increasing collections of items that are often not recyclable, (and items that are), like Thermoform plastics. Think clamshells that salads come in and deli containers, plastic egg cartons, and other #1 plastics. Check out their website to see how they encourage anyone to become a collection point and get good, clean materials to manufacturers. They work with some of the big companies who are striving to have more recycled content in their containers. They have a fairly simple goal....End Landfills!

We have also have the great fortune to be doing trail work with Sandy Freethey. She ran Trail Mix for 10 years, during the time that the group went out and did the actual trail building. She and her beloved passed husband Geoff, are responsible for creating over 150 miles of mountain bike trails. She and I go into the Potato Salad Hill and Powerdam sides of Mill Creek and do trail work together on occasion. We also have done several meetups at the in-town parkway to help clear the trails of debris from the series of flash floods we've had. Of course, with that the last flash flood, the land was greatly rearranged, so, like ants, we will continue on with what we can do to keep the trails clear and clean.

Hats off to the latest group of addiction fellows we met with on August 9th. These doctors are taking extra time to learn about addiction medicine so they can help their patients achieve freedom from the prison of addiction. We are pleased that so many doctors are studying ways to help people with substance use disorders. It is great for those suffering, and for the greater community. These fellows, studying at the University of Utah, will take rotations down here for a month at a time. They make it a point to volunteer with lots of the nonprofits working in the community to help folks in need.

We worked with a small group from the larger Faith-based Coalition to distribute money to many of the people who lost everything in the Murphy Fire that happened in June. From an August 17 Times-Independent:

“The impacted residents of the Pack Creek Mobile Home Park and the Grand County Faith-based Coalition would like to thank this community for your support,” reads an email sent out by Sara Melnicoff on behalf of Pastor Nathan James of the Moab Seventh-day Adventist Church, who said slightly over $25,500 was donated to the relief effort, the majority of which was raised by the Lisbon Valley Mine.

The distribution of funds has been divided between a variety of needs proportionate to the scale of impact in the various cases. The majority of the funding went to the families who had experienced the total loss of their home while smaller amounts were shared with others who experienced significantly lighter impact but still faced unexpected needs, said James.

“Thank you for your contribution to our community and neighbors,” he wrote. “It is people like you that make this county ‘grand.'”

It was wonderful working with the group to help the fire victims and we look forward to working together again.

In the meantime, our Emergency Needs Fund spent about $4,100 in July and $2,421 in August answering calls for urgent needs. We partner often with the good people at the Moab Valley Multicultural Center to make sure we did everything we could do to help people in their time of need.

And last but not least,

Friends of the Parkway, a project that Moab Solutions started in 2004 in partnership with the City of Moab, turned 18 years old in August. The project aims to get the community involved in keeping the parkway clear of trash and recycling, alerting us to major issues, like mattresses or shopping carts in the water, and performing minor trail maintenance.

Four years into the project, Moab Solutions stumbled upon many homeless camps, so starting in August, 2008, after conferring with the police chief and talking to some of the homeless, the group started a weekly meetup. We paid small sums of money to the people living along the creek in exchange for them bringing all the recyclables out of the camps to be sorted by type, and disposing of all trash in the cans along the parkway. That meetup lasted 5 years, during which Moab Solutions did intense street level case management to learn about and address the unique and complex issues facing these folks.

We introduced the homeless to the community by inviting them to speak at city and county council meetings, through newspaper articles, and at weekly dinners the First Baptist and Community Churches hosted. The community responded by donating homemade knit hats, making delicious lunches, and mentoring some of the folks.  Green job training at the recycle center and learning about lawn care work was provided. Eventually everybody got into housing, connected to treatment for substance use, or reunited with family. Volunteers sat with one man in the hospital as illnesses related to his former addiction robbed him of his life. Moab Solutions learned through that man's struggles that creating a nurturing environment helps some people decide to tackle the prison of addiction and free themselves from it, as he had done.

Moab Solutions continues to do street level outreach, and to care for the Parkway, a gem in our midst. We invite anyone who wants to volunteer to adopt a section of the parkway to keep it looking beautiful reach out to Moab Solutions for more information.

Moab Solutions also does daily work on public lands and advocates for reducing and reusing over recycling, and best-practices recycling over landfilling.

Older information not moved to the archives 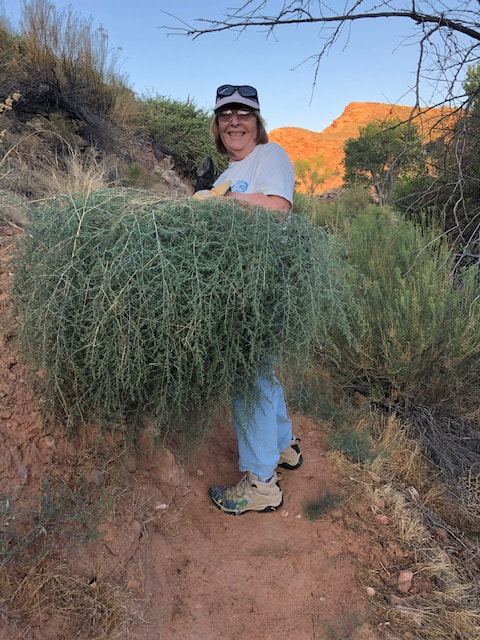 We had a mini work party in the canyon on September 1st, 2020. Sandy Freethey, trail worker extraordinaire, met me and Sam to help us maintain a trail and block some user made trails. That tumble is almost as big as Sandy!
Tragic Update on the BSPark.....

Well, despite all of our efforts, including an offer to redo the grading plan by a licensed grading contractor and permaculture expert, the original horrible plans went ahead and it is a huge disaster. Protected trees are being irreparably harmed, and the entire area desecrated. And we ask, FOR WHAT?

I have not been able to go anywhere near that area, nor look at photos. I am heartbroken and very disappointed with the city, for allowing this to take place. Let's not have a repeat! 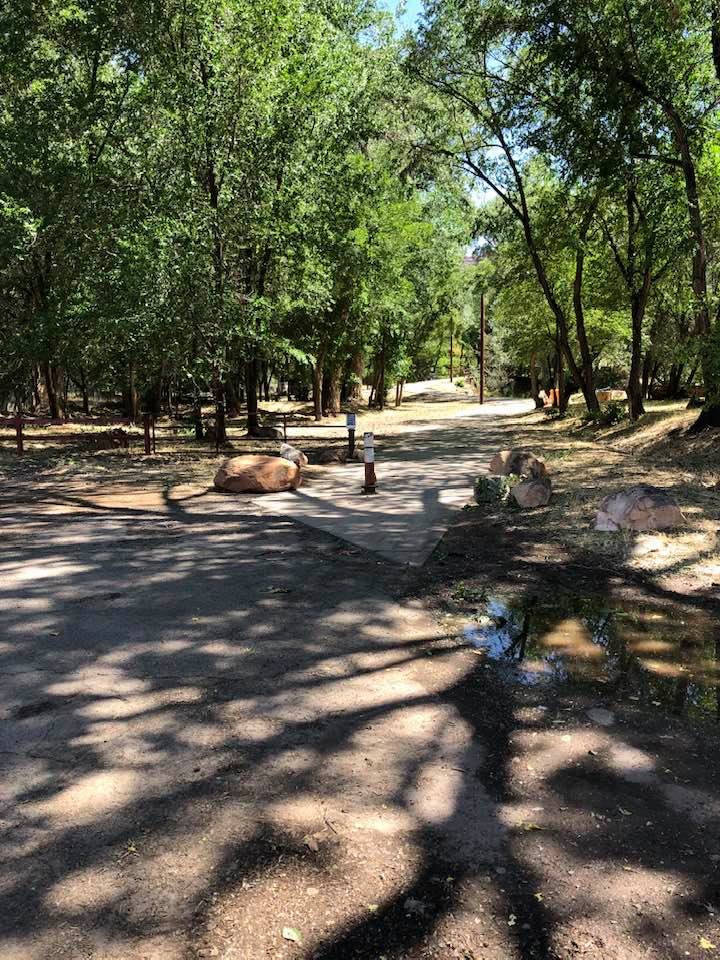 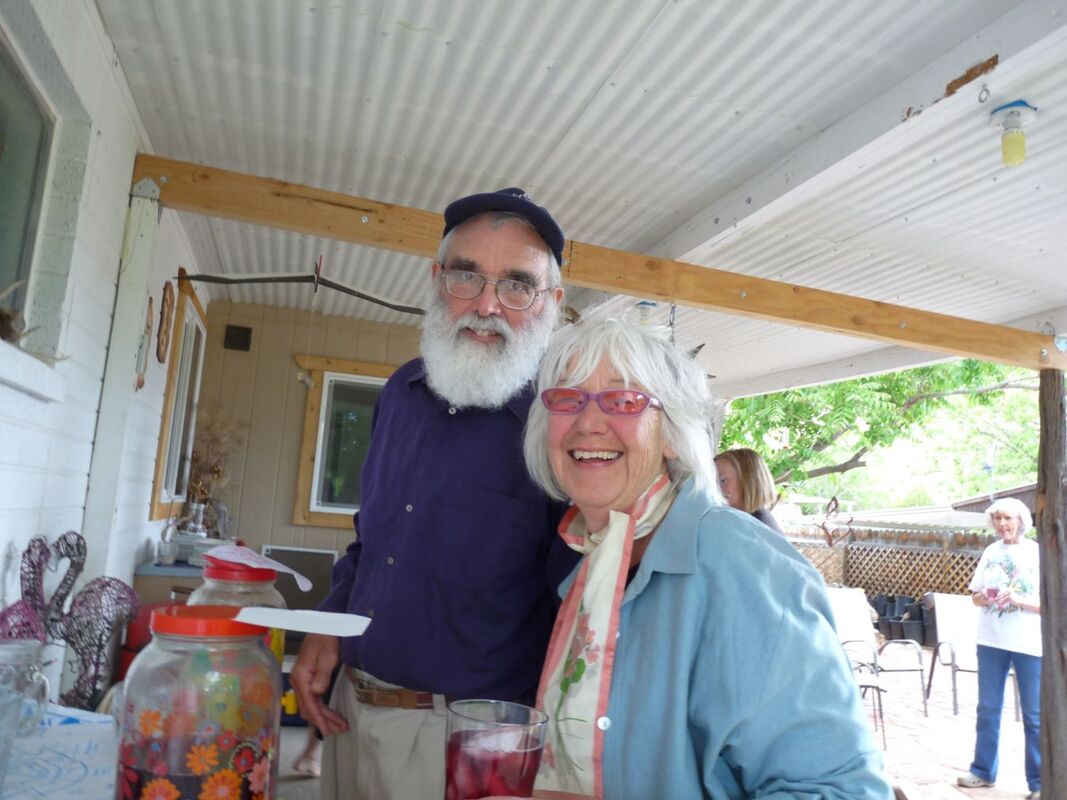 We lost another great one. Dean Nebergall, pictured here with Breezy, passed away on 12/6/19. One of the kindest humans to walk the earth, we send love unending to Dean and to those who love him. Long time Moab Solutions' volunteer Carol Hoggard - who passed away 7/5/19 - is seen in the background.