Wasting in the United States:
Despite decades of progress in recycling, the amount of garbage in America continues to escalate--due in part to a growing population, and in part to growing per capita consumption: the amount of stuff the average person buys, uses for a time, and discards. As the chart below shows, back in 1960, about 75 million tons of material were being wasted--not recycled--in the U.S. each year. By the turn of the millenium, this number had more than doubled, to 166 million tons a year. In the decade and a half since, recycling and composting efforts have taken only a small bite out of that number: each year, we still waste (landfill, incinerate, or litter) almost 160 million tons of material that could be used again.

How much do Utahans contribute toward the waste? 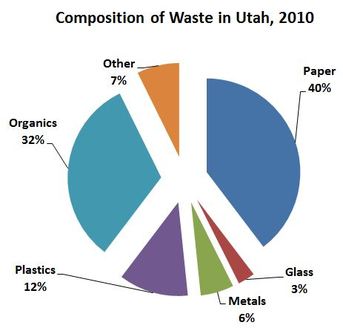 The Utah Department of Environmental Quality estimates that 3.7 million tons of waste were generated in the state in 2010. The pie chart shows the components of the waste generated.

According to a survey by BioCycle magazine, an estimated 5% of this waste is recycled.